The Butch is a heavy robot with 4 heavy hardpoints, but can only use two at a time.

The Butch's ability is called Quick Draw which allows it to switch between deployment of two heavy weapons with two heavy weapons stored on its back. Because the cooldown for Butch's Quickdraw is 18 seconds, the ability allows it to fire for longer periods and exploit long reload times of certain weapons. With four heavy hardpoints the Butch can use a combination of kinetic, rocket or plasma weapons to its advantage.

A tactic is to use weapons with different ranges to make it versatile, however as a general rule it's recommended to keep weapons of the same type and range. The Butch is often equipped with 4 Trebuchets, firing one pair after the other and making great use of its ability. This also offers the advantage to trigger a fully charged Trebuchet since the cooldown of the Quick Draw ability is nearly the same as the time to fully charge the weapon.

The Butch is one of three Quick Draw bots (alongside Jesse and Doc), all of which are available for purchase with Gold (Au). With 4 heavy weapon hardpoints, strategies include bearing four of a kind, using the Quick Draw ability to exploit reload times, or mix ranges between the two weapon sets to control as much area as possible. The most common use of the Butch is as a sniper for long-range supportusing quad Trebuchets. Trebuchets can also be used in combination with mid- / long-range weapons like Tempests, Tridents or Zeuses. It is not advised to equip only fast reloading weapons or fast unloading weapons, such as the Zeus or Ember, since it counteracts the long cooldown of the Quick Draw ability.

On long maps the use of quad Zenit is very powerful in support as the Butch can keep up an almost uninterupted rate of fire. Whislt this will not cause huge damage it is a very useful harassing fire tactic in support of a team on the attack as it pushes defenders out of cover quite quickly. However, both the Zenit and the Kang Dae are better for sniping, but some commanders direct their fast robots to take out this similar kind of long range setups. Using Thunders as a secondary weapons can combat this if warts get too close. The way the commander switches the Thunders as spawn setup or secondary setup is important, depending on the map

Butch, arguably, is one of the most heavily armed robot in the game. With the Quick Draw ability it is theoretically capable of dealing more damage per cycle than a Fury, but the Quick Draw's long recharge time generally reduces the amount of damage Butch can output. It has since also been outclassed by the Behemoth in most situations, however Butch's cheaper price and ability to remain mobile when its ability is activated allows it to win in some situations.

These are the recommended setups for the Butch:

Note: The Avenger is in the 'mid-range' category due to it dealing significant damage at 500m range, despite it being most effective (i.e. dealing more damage) at close-range, due to bullet spread. Therefore, the Avenger is suitable both as a close and mid-ranged weapon.

Due to its large frame, lack of shielding and low firepower for a heavy robot, players are advised not to use the Butch as a close-range brawler. The (short) reload time of effective mid-range weapons severely limits the use of the Butch's Quick Draw ability, with weapons such as the Zeus and Dragoon either having a short reload or Fire While Reload system. It is recommended to use the Butch as a long-range sniper to maximize the use and effectiveness of its ability to exploit reload times of long-range weapons and increase their overall firepower. 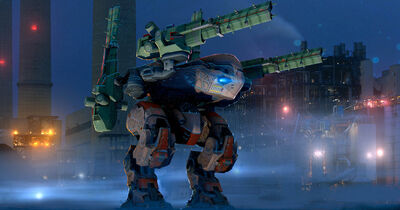