“…Durable robot notable for its unique defense system. Depending on the situation, Bulwark can activate an energy shield or a frontal physical shield…” – in-game description

The Bulwark is a medium robot with 2 heavy hardpoints, introduced in update 3.9. It is unofficially classified as a heavy robot based on wiki criteria.

The Bulwark's ability is called Protection, which activates a special energy shield called an "Aegis-Class Barrier".

The Aegis is a defense system that functions similarly to an Ancile shield, the difference being it defends the robot against all damage types (kinetic, splash, and energy) except for the Hellburner's Overload, the Mercury's Helldive, the Kid's Stove , and the Arthur's Blast Wave. It protects the robot from the Blaze, Igniter and Ember's flames, however the shield cannot regenerate while it is in use.

When the Aegis shield is deactivated it regenerates at 4.5% shield capacity per second.  While the Aegis shield is deactivated, the Bulwark deploys a frontal physical shield similar to that of a Lancelot but significantly smaller, so some weapon shots will damage the robot (e.g. the Thunder due to bullet spread). One of the Bulwark's unique features is having a shield active at all times (either the Aegis-class barrier or its physical shield).

The Bulwark excels as a mid-range support bot due to its ability, high health points, and two heavy weapons.  It relies on toggling between Aegis and Physical shield to absorb enemy fire while dealing out high damage with its weapons.  For close-range engagement the Ember is a good weapon choice due to it penetrating all shield types, and the Avenger has high Damage Per Second (DPS). Two Exoduses and Glaciers can unleash extremely high explosive burst damage. It can also function extremely well as a team player due to its durable Aegis shield, and a brawler due to its significant protection from punishment.

As a mid-range support bot the Bulwark makes use of its shields to protect itself against enemy snipers. Its highly mounted hardpoints provide advantageous shooting angles (i.e. over buildings so the Bulwark can fire while remaining covered). Good setups for mid-range include 2x Dragoons and 2x Tridents.

Note: The Bulwark is unable to mount an Ancile shield.

Bulwark is one of four robots (Blitz, Fenrir, Cerberus and Typhon are the others) to be mounted with a special Aegis shield that blocks every weapon types.  With the right weapon / Pilot / module combination, the Bulwark is a strong mid-range support bot with the ability to engage in close-range combat.

Some effective builds for the Bulwark are: 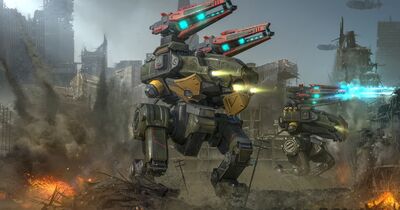 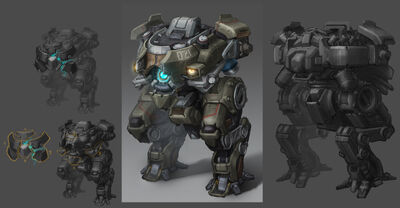