The Boa is a medium robot with a heavy and medium hardpoint. According to Pixonic, it, along with the Schutze, has been temporarily removed from the store for balancing purposes. One of the selling points of this robot was that it hoarded more durability then any other robot unlockable at its level.

The speed and durability of the Boa gives it a slight advantage on the battlefield. At level 9 it reaches its maximum speed of 42 km/h, allowing it to quickly close in or sneak up on slower enemies. The Boa's health rivals or even exceeds that of many robots much larger than itself like the Natasha, and it has the highest health of all robots in the medium class. This gives it a distinct advantage in low leagues where its durability is often the highest on the battlefield.

This robot performs well in low leagues and is good for transition into the middle leagues. However, the Boa loses utility in higher leagues where its huge health pool does not properly compensate for its lack of shields, firepower, speed and ability.

The Boa’s key strength is its high durability and therefore it should be used as a close-range brawler and for area defense, where it can make full use of its ability to outlast enemy robots such as Gepards and Stalkers. High burst Damage Per Second (DPS) weapons are recommended.

These are effective setups for the Boa:

The Boa is most effective as a close-range brawler, where it can make the most of its high durability and firepower. It is much less effective as a mid-ranger, and there is a lack of effective builds for long-range, as most robots will outclass the Boa in mid-long range combat where health isn't as important as firepower. Players are advised only to use it as a brawler.

Boas equipped with a Thunder and Orkan can deal devastating damage in a very short amount of time, with enough firepower to destroy most enemies before they can retaliate effectively. Using a Taran instead of an Orkan offers more firepower over a more sustained period of time, excelling against opponents with more firepower but less health, where the Boa can use its incredible health to great effect.

The Thunder/Storm setup has great synergy, as both weapons are the same type and deal similar damage. This build is particularly effective as a shield-breaker, as it does double damage to physical shields along with other kinetic weapons. Even at ranges of 400 meters where shotgun weapons are usually less effective, the bullet spread means that the fired bullets will still hit energy shields due to the large surface area.

Finally, using a Thunder and Punisher T provides decent and cost-effective firepower while players have yet to purchase Tarans, Orkans or Storms.

Note: Level 12 Mark I is required to upgrade (purchase) to Mark II. 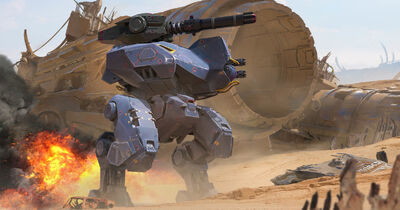