The Blitz is a medium robot with 4 light hardpoints. It is unofficially classified as a light robot based on wiki criteria.

The Blitz's ability is called Break-In. Upon activation the Blitz fires 3 shotgun-like spread shots that decreases the damage dealt by weapons of enemy robots hit by 75% for 5 seconds. During this time, Blitz's speed is increased by 100% (110 km/h at top speed), and the Blitz activates a temporary Aegis shield (does not regenerate while in use). The ability lasts for 9 seconds, and has a 17-second cooldown.

This robot is one of several robots capable of suppression, the others being the Nodens, Rayker, Invader, Nightingale, Typhon, Cerberus and Erebus . A good strategy is to use the Blitz as a hit-and-run style assassin or knife-fighter. If using the Blitz Legendary Pilot (Clive Vicious) the Blitz can be used as a brawler and tank significant damage when the ability is active since it gains damage resistance.

Since the Blitz lacks stealth and has a relatively weak Aegis shield, mobility within the 9 seconds is key. Suppression must be successfully inflicted upon the enemy to ensure you won't take severe damage. Remember to move back into cover before the Suppression wears off and your shield is depleted unless you are using the Clive Vicious legendary pilot.

The Blitz's decent groundspeed allows it to act as a beacon capper, while also supporting its allies. While a 350m buckshot range limits it to only being able to support allies at a dangerous distance, its speed, mixed with a temporary impenetrable shield and a huge damage reduction from the enemy, allows it to quickly run away if things get bad, while outmanoeuvring the enemy if they happen to give chase.

The combination of Aegis shield, suppression, and speed make the Blitz deadly, particularly against slower robots who don't have shields. With 4x Light Weapons, the Blitz can put out a lot of firepower. Gusts, Sparks, Scatters, or Rimes are very effective at dealing high burst Damage Per Second (DPS) and compliment the Blitz's assassin tactics.

These setups are recommended for the Blitz:

Note: Each slot type is filled with only one particular weapon. For example, if a robot has 3 light hardpoints, all three of those hardpoints should be filled with Pinatas, as mixing weapons of the same hardpoint type is not advisable.

The Blitz's built-in weapon system fires 3 rounds in 3 seconds, with 20 particles per round, and with a maximum range of 350 meters.

Each particle is guaranteed to suppress the enemy(s)' weapons.

Below is the average percentage (%) of particles (out of 20 particles) that hit an enemy robot (if aimed directly at) at specific ranges.

Note: The numbers shown are based on an average-sized robot being targeted. Due to this, these percentages can be higher or lower depending on the size of the targeted robot. 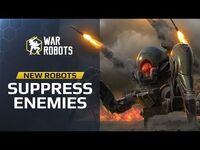 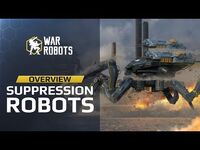