The Behemoth is a medium robot with 4 heavy hardpoints. It is unofficially classified as a heavy robot based on wiki criteria.

This robot's ability is named Siege Mode. Upon activation, Behemoth becomes 50% slower, and moves its 2 Heavy Weapons in the middle upright to it's firing position, being able to fire 4 heavy weapons simultaneously after 3 seconds of the ability activation. 4 heavy weapons is unprecedented in War Robots, providing high damage output, sometimes able to one hit kill" enemies with high damage per shot weapons such as the Trebuchet, Gauss, and Dragoon.

The deactivation of the ability takes 3 seconds, in reverse order: upon deactivating, Behemoth loses the ability to fire its 2 middle heavy weapons, then 3 seconds later Behemoth is more mobile again.

Behemoth has high health and immense firepower, so players engaging an enemy Behemoth should approach using cover or with protective shielding to get into an optimal position to destroy the target. Behemoth is particularly devastating in long, open maps such as Shenzhen, Springfield, and Canyon.

Behemoth is one of the two robots with a toggle-able ability that slows the robot's movement when activated. The other is Fujin. Before version 7.9 when the ability is activated, it would be one of the three robots who would become immobile. The others are Raijin and Weyland.

Despite its advantages, Behemoth is similar to both the Natasha and Fury, having a large frame, mediocre speed, and slow agility. This means that spread shot weapons (machine guns, shotguns) and explosive weapons are effective and dangerous to the Behemoth. To counter these dangers, mid-long range setups (such as Dragoon, Trebuchet, and Tempest) and rocket setups (such as Exodus, Avalanche, and Trident) or Ember is ideal.

Behemoth is vulnerable when activating / deactivating its ability since it is slowed massively and only able to fire 2 weapons. Behemoth pilots should carefully choose their position, maximizing cover while still having the ability to target enemies out in the open. The Phase Shift module can help in mitigating Behemoth's vulnerability.

Fast and agile robots can quickly close in and circle the Behemoth, making it difficult for the Behemoth to counter them. As a precautionary countermeasure, using a Lock-Down Ammo module would be advised. When piloting a Behemoth it is critical to keep smaller and faster robots at bay by killing them when they are in the open or keeping them suppressed and undercover by continuous fire.

Behemoth should be used to support a squad by taking out other mid- to long-range bots and weakening enemy tanks. If using Quantum Radar, the Behemoth is a great counter to stealth bots such as the Orochi and Ao Jun.

Similar to other robots with a big build, high firepower, and below average groundspeed, a Behemoth is easily taken out if it is targeted by an enemy. To avoid this, stay behind your teammates and make sure no enemy gets within the 350m range of Scorpion and Revenant's teleport.

It is the only robot with 4 heavy weapons useable at the same time, giving it the highest DPS (Damage Per Second) Allowing the Behemoth to unleash devastating damage.

These setups are recommended for the Behemoth:

Due to its large frame, mediocre speed, slow flexibility and lack of shielding, the use of the Behemoth as a close-range brawler can be a double edged sword. While the damage from four heavy weapons can create a potentially devastating one shot, one kill robot, the (shorter) reload times of many short or mid-range weapons on other (shielded) robots make use of Behemoth as a brawler a high risk/high reward option. However, an aggressive or even 'Kamikaze' style-of-play using four short-range weapons (i.e. Avenger, Avalanche, Calamity, Ember, Exodus, Glacier or Redeemer) can make this a fearsome opponent. 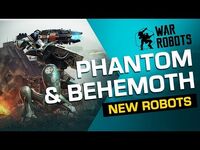 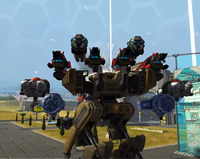