The Arthur is a Titan, with 1 alpha and 2 beta hardpoints.

The Arthur's primary ability is called Phalanx Mode , which moves its two side-protecting shields into the front to create a single, large shield. However, this costs the Arthur 20% of its speed.

The Arthur's secondary ability is called Blast Wave, which pushes robots within 100m away from the Titan and inflicts damage. The Blast Wave travels through shields and structures. In addition to helping Arthur take on multiple bots, and bots that are difficult to target due to their speed and agility (or hiding behind structures), the Blast Wave also can push bots that are in the air far away from the Arthur. This helps in capping beacons and causing bots such as Ao Jun, Nightingale, Hawk, Hellburner, and Mercury from using their ability effectively since it will disrupt firing angles or blast radius. No shields can block, Blast Wave also can take out all Aegis-class shields, while still doing damage to the robot itself.

The Arthur’s medium health, high resistance, and extremely high physical shield durability make it a perfect tank. It possesses low speed compared to other robots and titans. Its weapons are mounted on top, which allows for excellent ability to shoot over cover.

Due to its low speed and weapon mounting positions, it is best used to hold and control strategic points of the map, such as beacons or covered positions with open fields, which the enemy has to cross. However, it can also very well be used to spawn on beacons which are about to be liberated by the enemy.

If the large physical shield is closed and you are facing the enemy robots, you cannot be suppressed or locked down, as the shots have to hit the robot directly. The only exception is the Invader which delivers the suppression effect via AoE. This is why when facing lockdown weapons or robots with suppression abilities, it is recommended to keep the shield closed. Furthermore, it should be closed when being shot by energy weapons as physical shields are most effective against this damage type. When fighting robots with explosives, keep in mind that your shield will only partially block explosives, and is useless against flamethrowers (Ao Jun, Blaze, Ember, Igniter)

The Blast Wave ability should be used as often as possible to maximize damage output. Through its AoE damage multiple enemy robots can be damaged if they are in the blast radius. It is especially useful when dealing with Pantheon robots running their absorber shields, with stealthed robots, or with fast bots that are otherwise difficult to target with the main weapons. A further use is to push enemy robots off of beacons in order to recapture them (in case you spawn your Titan on a beacon which is about to be liberated) or pushing robots off cliffs. One less known use of the Blast Wave ability is to push away Mercury robots which try to damage the Arthur with their Helldive ability. When timed right at a good opportunity, you can not only prevent the damage but also push them off the map or into deadly pits. As a side note which becomes more significant later on in the game, Blast Wave can bypass damage resistance, so use it on Leeches, Falcons and Phantoms if they come in close.

The largest danger for the Arthur comes from sustained AoE damage through, for instance, Ember and its family as it goes straight through the physical shield.

A further danger comes from being flanked, especially with shotgun weapons (energy shotguns included) or Avengers, as the physical shield can only be brought to the front of the Titan. Due to the Titan's large size, many of the shotgun pellets will hit, even if the enemy robot is far away.

These are the recommended setups for the Arthur:

Each slot type is filled with only one particular weapon. For example, if a robot has 3 Beta all three of those slots are filled with Retaliators, as mixing weapons of the different ammunition types is not recommended. 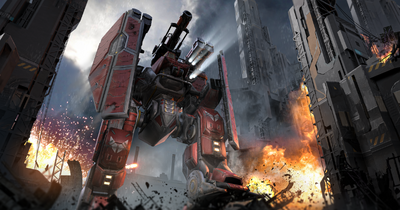