The Ao Qin is a medium robot with 4 light hardpoints.

When Dragon Strike is activated, the robot rises into the air, gains a 20% speed boost (60 km/h at max speed) for 10 seconds, and can damage enemies with its built-in electric arc cannon. However, it is possible to manually shorten the duration and land prematurely. Doing so will automatically stop the flight and laser cannon.

While in flight the robot hovers and cannot increase or decrease altitude. It can, however, reach a higher altitude if the ability is activated in a location higher than ground level or using the Jump Unit Active Module. Also, the robot can stay stationary while in midair.

The laser functions much like the Spark, the Scourge, and the Calamity, with a maximum range of 600 meters. Being the energy damage type it can also bypass energy shields. In order for the laser cannon to be fired the pilot must have the cross-hairs focused (aimed) on the target.

The Ao Qin is part of the SpaceTech faction, along with the Ao Guang and Ao Jun.

This robot has relatively low health and firepower, and its best asset is its speed in flight. Using its Dragon Strike ability gives the pilot an opportunity to quickly maneuver and attack an enemy robot then move back to cover.

The Ao Qin can support a team pushing for a beacon or help flank the enemy. It is vulnerable while in the air so the pilot should use its speed to escape if confronted by a more powerful bot. When its ability is cooling down the Ao Qin is best suited to support team attacks and not take on enemy robots in a one-on-one situation.

The Ao Qin's built-in weapon has sufficient range to attack enemies from a decent range, although at its maximum extent it won't deal that much damage. As it is extremely vulnerable in the air, it is recommended to push as far away from the enemy as possible, while also making use of the built-in weapon available when flying. To maximize its damage potential try equipping ranged weapons such as Marquess.

Ao Qin is a medium bot with 4 light hardpoints and can cover ground quickly which lends itself to ambush tactics. The Ao Qin is agile and can dodge enemy weapons that lack lock-on ability. However, due to its fragility it is considered a low threat in higher leagues.

These setups are recommended for the Ao Qin:

Can fire up to 80 energy charges in an 8 second span, with a 600-meter maximum range. Fires only while flying. Manually aiming (cross-hair on target) is required for the energy beam to be fired. 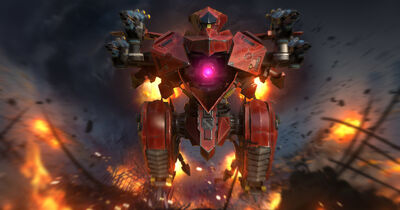