“…Dragon Titan is the pinnacle of SpaceTech engineering and can stay in flight indefinitely. On the ground, its defence system is enhanced; while in flight, its speed is increased and all weapon slots are active…” – in-game description

The Ao Ming is a Titan with 2 Alpha and 2 Beta hardpoints.

This Titan has the Dragon Flight Ability, which allows it to take off and fly for an unlimited amount of time while also allowing it access to its beta weapons and gains a 30% speed boost (56 km/h at max speed). While in flight the Ao Ming loses its damage resistance making it more vulnerable.

The Ao Ming has a secondary ability called Self Repair, which allows it to heal itself for 5 seconds for a fixed amount of health based on its engine level (similar to the Repair Unit modules).

The best strategy for the Ao Ming is to keep your distance and use cover since when in flight you are vulnerable to all types of weapons. Tsar and Ruptures are good for dealing high burst damage per second and to bypass Arthur's shield. Gendarme and Cuirassier are the best weapons for the Ao Ming as you can keep your distance of 600m which is outside the range of Titan machine guns and rockets while dealing massive damage.

If in between healing abilities and taking damage It is recommended to drop to the ground and take cover. This can lower the chance of you getting attention from the enemy, lower the damage dealt to the Ao Ming, and allow your healing ability to recharge. Also since Ao Ming, similar to the Arthur, has all of its hardpoints positioned on the top when on the ground, it can effectively shoot over structures.

Level is on a scale of 1-50. It is based on the level of each upgrade, not the singular level of Ao Ming itself.
Defense Points are based on percentage of damage mitigated.
Defense points are additive - at level 50, Ao Ming will have a total of 250 Defense Points on the ground
Cost is singular across each upgrade (e.g. The cost to upgrade Hull to Level 10 is the same as the cost to upgrade Engine to Level 10). 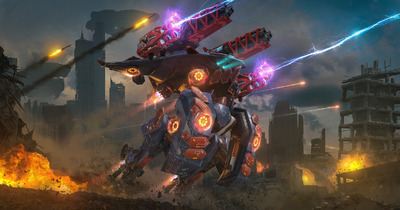 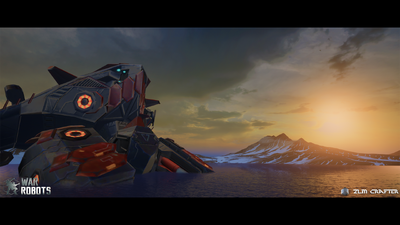 Retrieved from "https://warrobots.fandom.com/wiki/Ao_Ming?oldid=337389"
Community content is available under CC-BY-SA unless otherwise noted.